By day, I work as the UX Architect for CHSI Technologies, a Las Vegas-based insure-tech company. After hours, I organize Las Vegas Developers, the largest meetup of coders in our city.

I signed up for Startup Weekend this year with the intention of personally hacking out a simple web application: a self-updating directory of developers in Las Vegas.

Prior to Startup Weekend, Las Vegas Developers had little web presence besides our Meetup page. I wanted to change that by making an application that would display our members’ projects online after they presented them at our monthly event, Demo Day.

I decided to pitch on the first night’s Call for Ideas to see if anyone wanted to help build this in the next two days. When I got six amazing team members volunteering their diverse abilities, I realized someone needed to lead. Combined with the fact that my CTO at CHSI Technologies asked me to take more of a management role this quarter, I knew I had to step away from coding and step up to lead the team. But how?

“I’m looking for stone-cold killers willing to kick ass and get shit done!” I declared. I wanted to be divisive in my call-to-arms. I wanted some people to be turned off. And I wanted a select few to rally around the cause — in this case, people who saw themselves as ass-kickers.

I learned this from fellow Vegas resident Tony Hsieh, CEO of Zappo’s, who will pay you to quit, weeding out those less dedicated to the cause.

Fire before you hire

Leading at a hackathon is an interesting challenge. People are volunteering their weekend to your idea. Turning away voluntary help can be awkward.

“Unfortunately all of our spots are filled and our team is already built,” I said, looking a newcomer in the eye. My 6 other team members froze.

“Ok,” the newcomer said and went off to join another group.

My team members were shocked when I immediately turned someone down who approached our growing group. I felt bad too! But I saw how disruptive this newcomer was. I had been scouting the room all night, and this particularly loud and obnoxious attendee was someone I didn’t feel good about.

When he trainwrecked the team he eventually joined, dissolving its final pitch into a shouting match and battle for the microphone, we all felt better about this decision.

We were stone-cold. I said it in my pitch and backed it up with action.

Immediately after that, I set expectations for the team. We’re not here to pretend we are Steve Jobs and we’re launching the iPhone. We’re here to have fun and build something cool. We are going to behave like this a viable product and a real company for the sake of the competition, but in the back of our minds we will really be there to have fun and make something cool.

“Is everyone okay with that?” I asked. “If not, you could pull me aside and join another team, or just take off without saying a word, no hard feelings.”

We talked openly about what we wanted to get out of Startup Weekend. No one said they expected to start a unicorn business from this venture. Most spoke of gaining experience or having a good time. I was glad to see our goals were realistic and aligned and made us feel good.

Break the ice and dive deep

After an intense first night, I wanted to unite the team. I spent the rest of the night at home planning how we could do this. Then we spent the first hours of the next morning getting to know each other.

I believe ice-breaker questions should have an intention behind them, not just be a silly time-waster.

One of those questions was, “What is something about you that no one else at Startup Weekend knows?”

I did this to make the team feel collegially conspiratorial — like we were all sharing secrets with each other, and we had these things to unite us.

Then I asked: “What amount of money would it take for you to ‘fast forward’ to next week, everything occurring as it would in your ‘timeline’ but you just miss it?”

Most people said their time was priceless and couldn’t put a figure on it.

And that’s the point. Our time is priceless, so let’s make the most of this weekend with each other. Let’s spend the time as if it’s all we’ve got.

Ironically, this activity took up the entire morning of the first day of hacking. But I believed it was an investment that would pay off immediately.

One of our team members said it best:

It was a worthwhile investment. I think this really brought us together as a team and unified us toward creating a working product.

“Voice and choice” is a way to grant team members autonomy while still focusing on the team’s goal. It’s an idea taken from thought leaders in the education world.

Take 2 minutes to watch this video made by high school science teacher Jeff Robin and think of how business leaders can apply this to their teams:

Giving a voice and choice to team members increases buy-in and moves members’ motivation up Maslow’s hierarchy of needs toward self-actualization and pure joy.

Our hackathon team did this by brainstorming all the features our application could have. Then every developer initialed which feature they’d like to work on, allowing for multiple developers to initial the same thing.

They would either pair on such things or one developer would grab something while another was occupied. 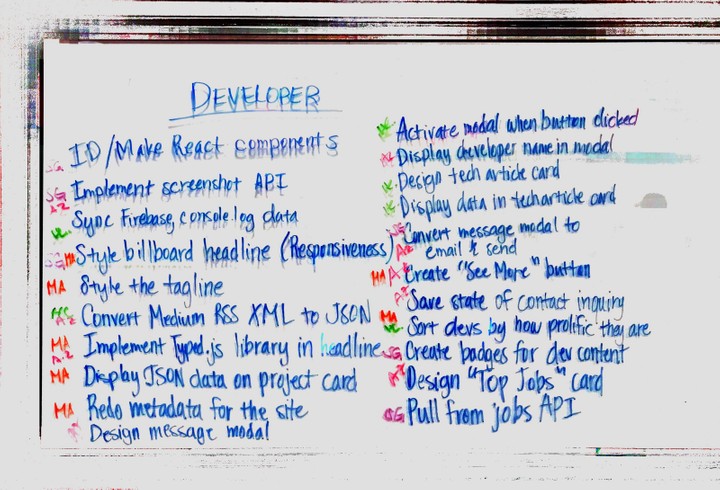 Together we decided on the most minimum feature set that we had to release, truly a minimum viable product. Then we ranked the remaining nice-to-have features individually, 6 through 1, and added up their scores.

Now we had a roadmap: the minimum we had to execute, and the cool stuff we would get to if we had time. And it was divvied up according to what each developer wanted to work on, their voice and choice. 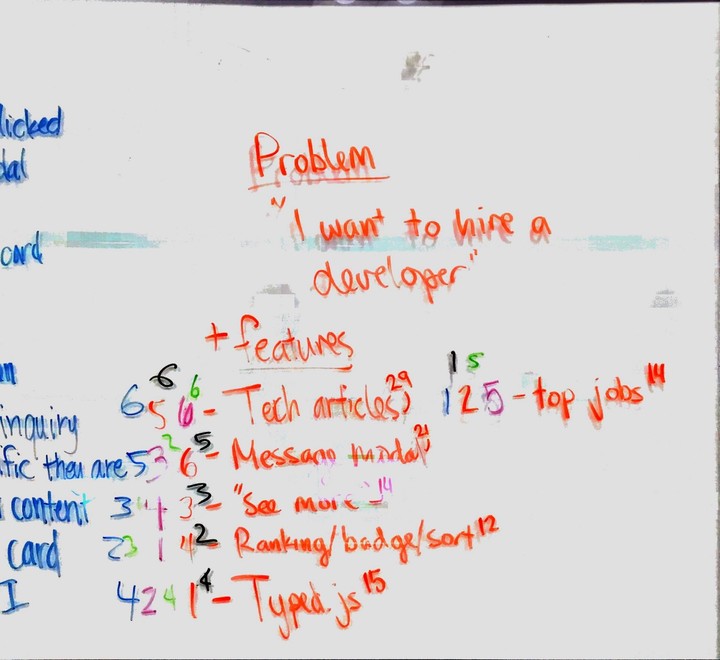 If you watched the video above, you heard a beautiful phrase borrowed from Nietzsche.

The artist is he who dances in chains.

Jeff Robin explains that by giving his students constraints, he enables their creativity.

Voice and choice is tempered with… experience and preset parameters. Everyone has parameters. Pop singers have three minutes, accountants have the tax code, physicists have Newton, and artists have canvases.

So I had to use my experience and consider the skillset of the team to make “canvas” decisions — laying out an environment where everyone could feel successful.

Would I have preferred to use robust task management software like Github Projects, Waffle, or Moo.do? Yep! But one of our team members had only been coding for 13 days!

And we had two team members who weren’t coders, but were business analysts or marketing folks. So I made the decision that we would use Trello for task prioritizing and workflow and Slack for communication — tools everyone could adopt quickly.

I also made the “canvas” decision that we would use a React / Firebase / Bootstrap 4 framework I made — it was simple and modular. Our most senior dev wrote up a strict branching / pull request checklist, put it in the README, and helped everyone get aboard the codebase.

With these preset parameters, we allowed the developers to work within constraints and actually be more creative and enjoy their contribution to the project.

Leading is out, facilitating is in

Everyone thinks of themselves as a self-starter. But then they believe their employees need to be assigned work, or led in a direction, or “held accountable.”

If you’ve hired well, a leader’s job is to make sure the team can do their job — no longer leading them, hand-holding, managing, micro-managing, directing, or anything else that puts a bad taste in my mouth as I type the words. The only word I like to use to describe this role is “facilitator.”

Marcus Blankenship, a coach for tech leaders, defines leadership to mean something similar:

Leadership is the process of creating an environment where everyone can participate in solving the problems at hand.

Call yourself a leader on your resume, but act like a facilitator while in the trenches.

You’ll know you’re doing it right when people are coming to you for quick advice and leaving happily empowered to do more.

The leader isn’t the one talking the most, it’s the one everyone talks to.

Again, many bad managers think their reports would be happiest slacking off all day. This demonstrates a clear ignorance of Maslow’s hierarchy of needs and the fact that “the self only finds its actualization in giving itself to some higher outside goal.” People are happiest achieving things. Enable them! 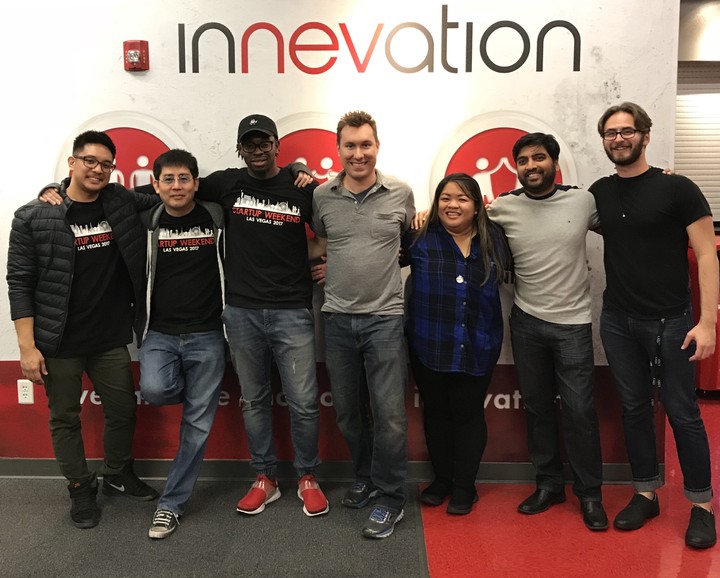 In the end, we came together as a group, worked hard on a common goal, and had a ton of fun. Developing something useful and winning Startup Weekend was just a byproduct of that process.

How to handle all the information life throws at you

how we work   5-minute video